The Confederation of Canadian Unions asked me to design a poster to commemorate the life of former federal New Democratic Party Leader Jack Layton, who passed away of cancer in August 2011.  I utilized a photo of Jack and “posterized” it against a background of primarily orange, the official colour of the NDP.

On the left, I included Jack’s final words to the nation, in which he wrote about the importance of love, hope and optimism in helping to change the world. 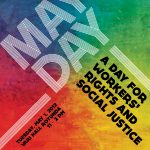