By seancain
Posted January 20, 2015
In News
Dear Right: The Left is Winning. Get Over it2015-01-202017-07-27https://www.freelancewrite.org/wp-content/uploads/2017/02/better-world-communications-logo-for-website-6.pngBetter World Communicationshttps://www.freelancewrite.org/wp-content/uploads/2015/01/capitalism-works-for-me-freelance-writing.jpg200px200px

It never ceases to amaze me how fast things change in the world of politics.

We all remember the 1990s. Just talking about raising wages, increasing social spending or regulating an industry was practically a thought crime. Even mentioning the word “capitalism” was to drum up fears that – heaven forbid – you were thinking about a different kind of economic system.

Two decades later, and years of neo-liberal policy failure speak for themselves – stagnant wages, increasing debt, widening inequality, and a global economic order stumbling from one crisis to another, not to mention a deteriorating environment and wars for profit killing hundreds of thousands.

Right-wing economic theory – once a hallmark of conservative thought – has degenerated into sheer lunacy. Not even the wackiest of corporate politicians would campaign on deregulating the financial industry, privatizing our health care system or giving tax breaks to banks and billionaires (even though they have no problem doing this as silently as possible when in government).

A recent Environics poll showed that 65% of Canadians believe that taxes should be raised on banks and financial institutions to reduce the deficit, and 83% agreed that taxes should be raised for the “richest income earners.” At the same time, an Abicus Data poll showed that only 21% believe that “lower corporate tax rates encourage investment and create jobs,” a theory which for two decades stood as the pinnacle credence of neo-liberal faith.

Even in the United States, a 2012 Pew Research poll showed that while 46% of 18 to 29 year olds viewed capitalism as “positive,” a higher 49% of those in the same age group viewed socialism positively. And in all ages, only 50% viewed capitalism positively and 40% viewed it negatively. This is a remarkable statistic from a country where even the “liberal” media presents their economic system and corporate interests in such an overwhelmingly positive light.

Just ten years ago, socialists couldn’t even have dreamt of these kinds of numbers.

At the same time, the right-wing media owned by the corporate elite have been debased into pure theatre and a source of comedy. A vast majority understand too well that Sun TV, FoxNews, right-wing newspaper chains and personalities like CBC host Kevin O’Leary aren’t even under the pretense of performing real, actual journalism. Admitting that you listen to them and take them seriously in front of others – especially during life’s more sensitive moments like job interviews, dinner parties and first dates – is to pay a hefty social price of utter embarrassment.

The global revolt against the failed policies of neo-liberal capitalism rests on an ancient and very well-understood reality: that injustice breeds resistance. Everywhere. Always.

Neo-conservatism’s greatest fear has come true: the class struggle is back.

The Left and labour unions have been pinned against the wall for so long, we almost forgot what it feels like to be winning. Working people may certainly be losing the economic battle against austerity and corporate power, but when it comes to the ideological clash, we’re way ahead, and we should start acting like it.

It may be difficult to feel happy in times like this, but that shouldn’t take away from us feeling confident about the rapid change in attitudes of people in Canada and around the world inspired by the vision of a more democratic, free and socialist future.

There’s Nothing “Radical” About SocialismNews 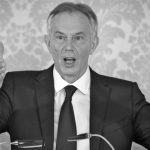 The Life and Death of the Third WayNews